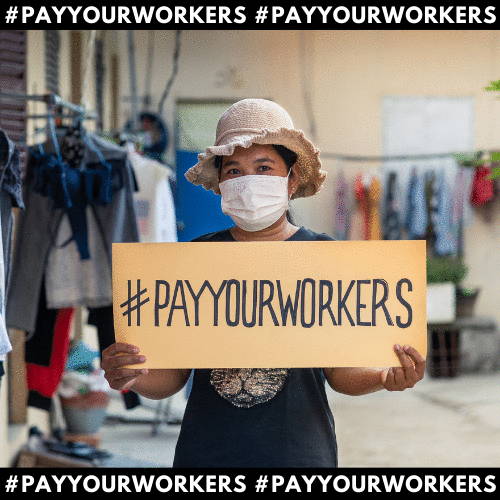 After high street fashion brands cancelled billions of pounds worth of orders at the start of the pandemic, garment workers across the world have faced poverty and hunger, due to reduced pay and widespread job losses. Out of 400 garment workers who were interviewed in a major study spanning 158 factories in nine different countries, a staggering 77 per cent reported they were going hungry.

The study, conducted by the human rights group Worker Rights Consortium (WRC) in collaboration with the University of Sheffield, found that 60 per cent were still employed, yet garment workers had received a 21 per cent decrease in pay on average since the start of 2020, making it impossible to cover even basic living costs.

Now, using the hashtag #PayYourWorkers, two high-profile groups the Clean Clothes Campaign and Labour Behind The Label have launched a global initiative aiming to pressure high street giants into making sure their workers are properly paid, despite the cancelled orders. Through confronting major labels and companies both on-line and IRL in locations around the world, the campaign is issuing public reminders to ensure the full wages of garment workers are paid.

‘The pandemic exposed deep-rooted flaws in the fashion system, and over a year later, those cracks are only widening,’ says ethical fashion specialist Ruth MacGilp, who works for the non-profit Fashion Revolution and co-hosts the Common Threads podcast.

‘When Covid-19 hit, the rug was pulled out from underneath suppliers in the Global South, and the people who make our clothes were left without any safety net,’ she explains. ‘Fashion is one of the most labour-intensive industries in the world but in 2021, its skilled garment workers are still too often seen as collateral damage in the unjust and exploitative purchasing practices of major brands and retailers.

‘The #PayYourWorkers campaign is an important mobilisation of action for citizens to demand accountability from the brands directly responsible for underpaid wages from cancelled orders as far back as March 2020, many of which remain profitable.’

Primark was one of several major brands to receive intense criticism for cancelling all their orders last Spring, leaving suppliers with a shortfall in cash and workers going without pay. But after intense campaigning from the team at Labour Behind The Label and other partners, Primark announced it had created a fund to help pay the wages of workers linked to cancelled orders in seven countries including India, Bangladesh, Cambodia, Sri Lanka, Vietnam, Myanmar and Pakistan. See the full statement on the Primark website.

This week marks the launch of #PayYourWorkers week of action, where a coalition of more than 200 organisations across 40 different countries, is demanding that brands and retailers provide better financial support for garment workers and better labour rights. The campaign highlights that a year into the COVID crisis, many brands have returned to profitability or even seen record level earnings, while workers in their supply chains struggle to survive.

‘Before the pandemic, I bought food for my child regularly, but after losing my job, I cannot even buy fish or meat. Egg is a luxurious food for us now,’ said one Bangladeshi worker interviewed for the WRC study, who reported she had previously produced clothing for Primark and Mango.

Another Indonesian worker who said she sews clothes for Nike revealed she had made the decision to reduce her food intake because she was already in debt and afraid to accumulate more debt.

Ineke Zeldenrust of the Clean Clothes Campaign wants to see high street brands worldwide meet this specific request: ‘We have calculated that it would take just ten cents per t-shirt for fashion brands to make sure garment workers can at least survive the pandemic, and to strengthen unemployment protections for the future,’ she says.

‘This is the minimum brands should do on the way to the living wages which must become the standard of a post-pandemic recovery. This proposal is achievable, and brands and retailers who say it is not are putting profits before the well-being of their workers.’

Penelope Kyritsis, Director of Strategic Research at the Worker Rights Consortium and co-author of the study we’ve quoted points out that ‘mass market retailers, like Amazon and Target, are thriving during the pandemic. These companies, and the industry as a whole, are more than financially capable of ensuring that the workers who sew their clothes are able to feed their families.’ 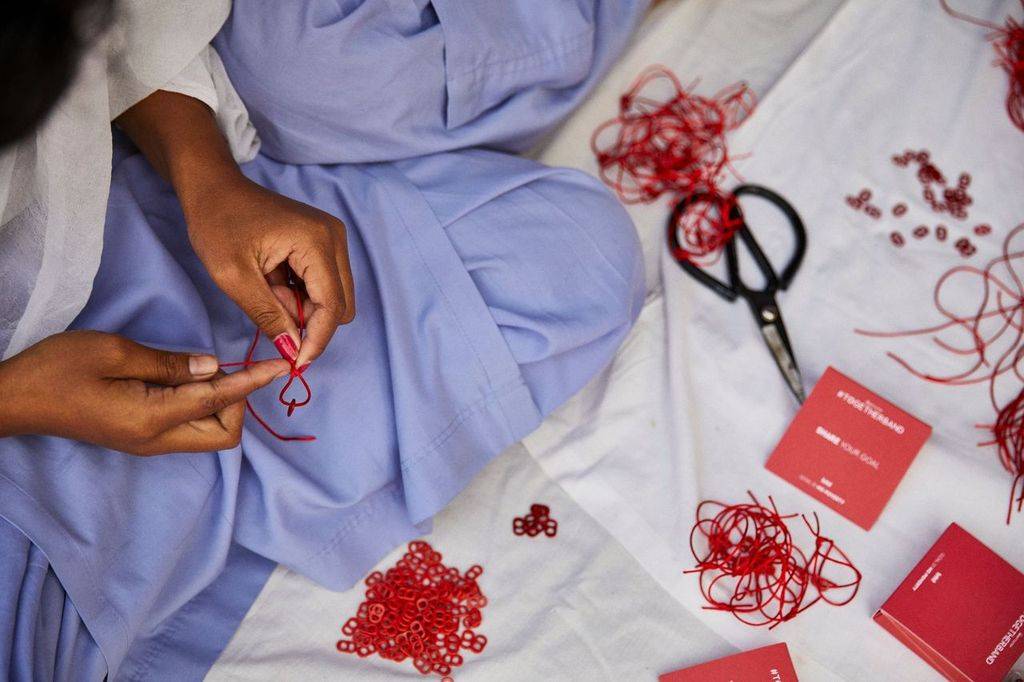 Here at #TOGETHERBAND and BOTTLETOP it is our mission to make sure our bags, bands and new range of #TOGETHERWEAR clothing have a positive impact on both people and planet. Despite the temporary closure of our physical stores during lockdown, we have of course continued to pay our production teams in Brazil and Nepal. In Brazil our skilled artisans are paid 45% above the national industry average, meaning the sale of every BOTTLETOP bag makes a real difference to the livelihoods of these women.

In Nepal we work with women at Maiti, a non-profit organisation dedicated to rescuing and rehabilitating victims of trafficking. Our aim is to provide women with fairly paid work and the opportunity to build new skills. Similarly, we’ve also teamed up with ROKPA, an international relief organisation that runs a network of projects in Nepal, South Africa, Zimbabwe and the Tibetan regions of China to help people living in poverty. Through ROKPA, we now have a large team of women via their Nepal training projects creating our classic #TOGETHERBANDs.

In June last year, we launched our #TOGETHERMASKs in response to the pandemic and thanks to your support, we’ve been able to donate 55,000 face shields and over £21,000 so far to Médecins Sans Frontières.

In these difficult times, use your consumer power to support the brands you love and sign the #PayYourWorkers petition to urge all clothing retailers to:

Why Frogs Are Fantastic