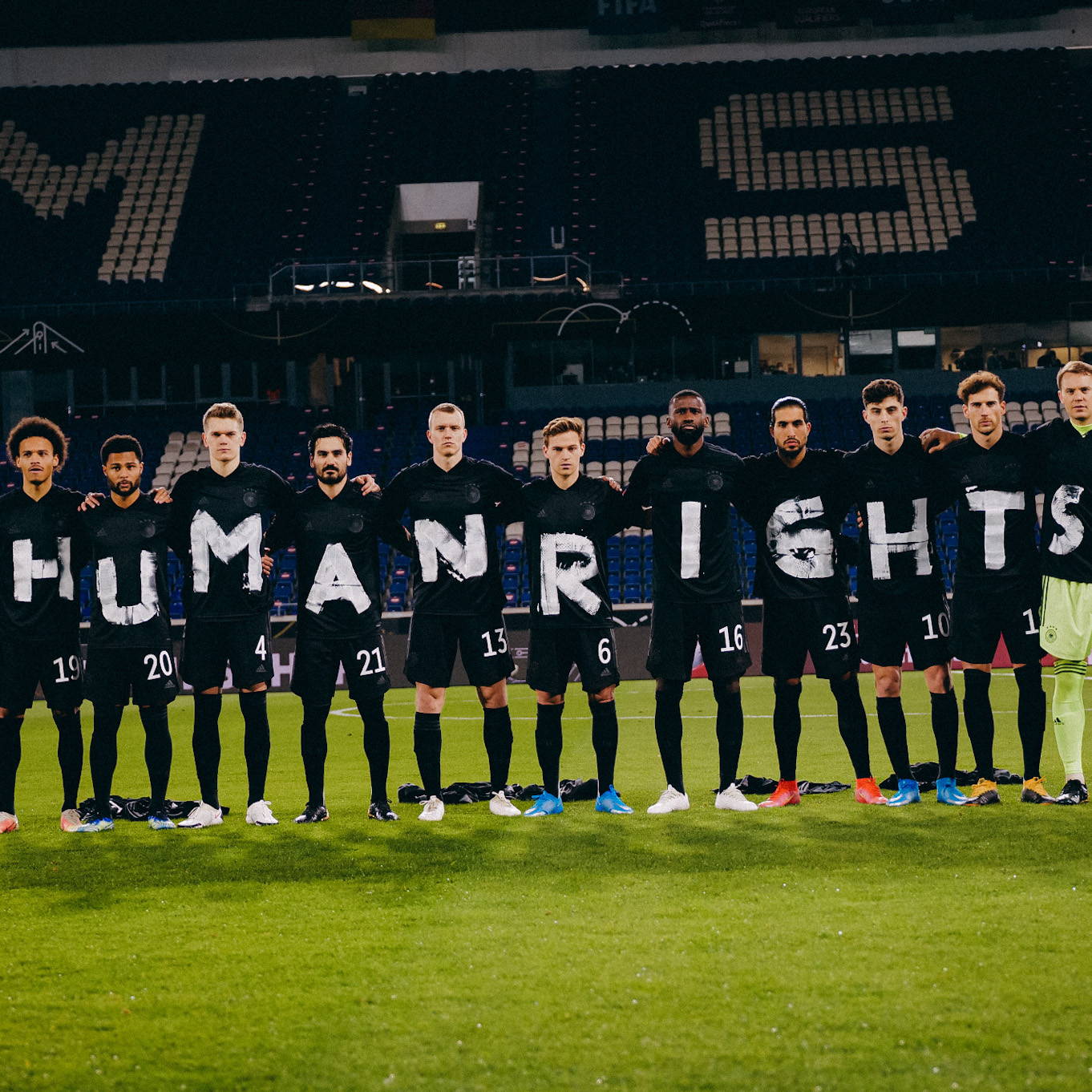 Footballers using their high profiles to protest is something that we’ve become more and more accustomed to in recent times. Players in the English Premier League continue to show their support for the Black Lives Matter movement by taking the knee at the beginning of every match, a gesture that the national team also honoured at their World Cup Qualifier against San Marino on Thursday. But it’s a different cause that players from Norway and Germany’s national teams have stood up for this week.

On Wednesday, Norway’s team and substitutes wore white T-shirts before their match with Gibraltar with the words ‘Human rights on and off the pitch’, while on Thursday, Germany chose black T-shirts, each with a single letter that spelled out ‘human rights’ when the team stood in line before kick off with Iceland (pictured, top). Both protests were in response to the poor human rights track record of Qatar, which will host the next World Cup in November 2022.

Over 6,500 migrant workers have died

According to a recent report in the Guardian, since Qatar was announced as host in 2010, more than 6,500 migrant workers have died during the construction of the seven new stadiums, as well as new roads, airports, hotels, public transport and even a new city, that are required for the tournament. The workers, who travelled from India, Pakistan, Nepal, Bangladesh and Sri Lanka, have died at a shocking average of 12 people per week since work began. It’s believed the death toll could be considerably higher, since data from other countries that also send a high number of migrant workers to Qatar - the Philippines and Kenya - is not included.

Many deaths remain unexplained, but most commonly they are attributed to heart or respiratory failure, which is classed as a ‘natural death’. It’s thought that the extreme summer heat in Qatar is likely to be a factor; for four months of the year it is so hot that anyone working outside is likely to suffer from heat stress. But death classifications are usually made without an autopsy, something that Qatar’s own government lawyers have recommended should change, to no avail.

'Football as a force for good'

Behind the scenes this week, Amnesty International wrote a letter to football’s world governing body Fifa, urging it to press Qatar to stick to its promised labour reforms before the tournament kicks off. But it’s high-profile moments like those created by Norway and Germany’s teams that really make the headlines, and as is increasingly the case when footballers choose to protest, Fifa has decided not to take any disciplinary action against the teams for their actions, saying that it ‘believes in the freedom of speech, and in the power of football as a force for good’.

Profits from sales of Goal 8 #TOGETHERBANDs go to Goodweave

What Do We Know About Long COVID?