Lewis Hamilton was joined by some of his Formula 1 colleagues at the weekend in taking the knee to support anti-racism at the Austrian Grand Prix. And although six of the 20 drivers - including Ferrari's Charles Leclerc and Red Bull's Max Verstappen - decided that taking the knee wasn’t for them, Hamilton was philosophical about their decision.

‘It's still a really powerful message but whether or not you kneel is not going to change the world,’ he said. ‘It's a bigger issue across the world than something as little as that.’

‘I believe what matters are facts and behaviours in our daily life rather than formal gestures that could be seen as controversial in some countries,’ continued Leclerc. ‘I will not take the knee but this does not mean at all that I am less committed than others in the fight against racism.’ All 20 drivers issued a joint statement before the race through the Grand Prix Drivers’ Association united against racism and prejudice and in support of diversity.

The gesture of taking the knee was started by the NFL’s Colin Kaepernick, a former 49ers quarterback who knelt during the US national anthem for much of the 2016 football season in order to raise awareness about racism and police brutality. It has since been used by protestors at Black Lives Matter marches across the globe, and at other sporting events, including before English Premier League football games - a sport which has been vocal about supporting anti-racism for some time with its Kick It Out campaign, founded in 1993. 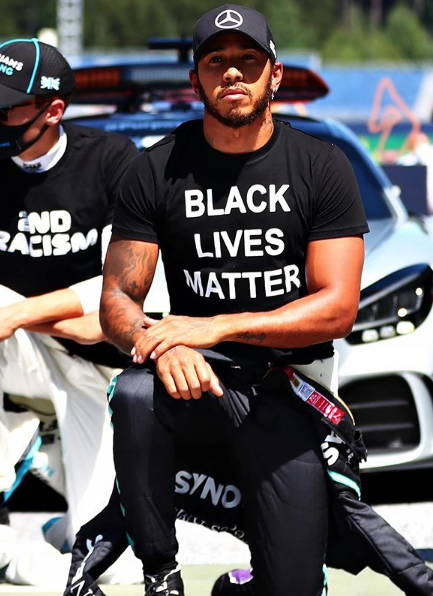 It’s a sometimes controversial action, however, and Hamilton himself acknowledges that he wouldn’t always feel comfortable taking the knee. ‘I definitely don't want to do it on national anthems. But I would say definitely in the background I will continue to try to improve my education and hopefully encourage others. I don't want it to be the case of people feeling forced. I want people to feel excited to be a part of the change.’

And encouraging people to change is something that can be promoted in many different ways. Hamilton races for Mercedes, for example, who have changed the colour of all of their team cars from silver to black this year. It’s a move to openly show support for anti-racism and diversity in Formula 1.

Lewis Hamilton is a #TOGETHERBAND ambassador for Goal 4: Quality Education

Why Eating Fairtrade Chocolate Today Will Save Lives

Hamilton is now streaming - and it’s more relevant than ever