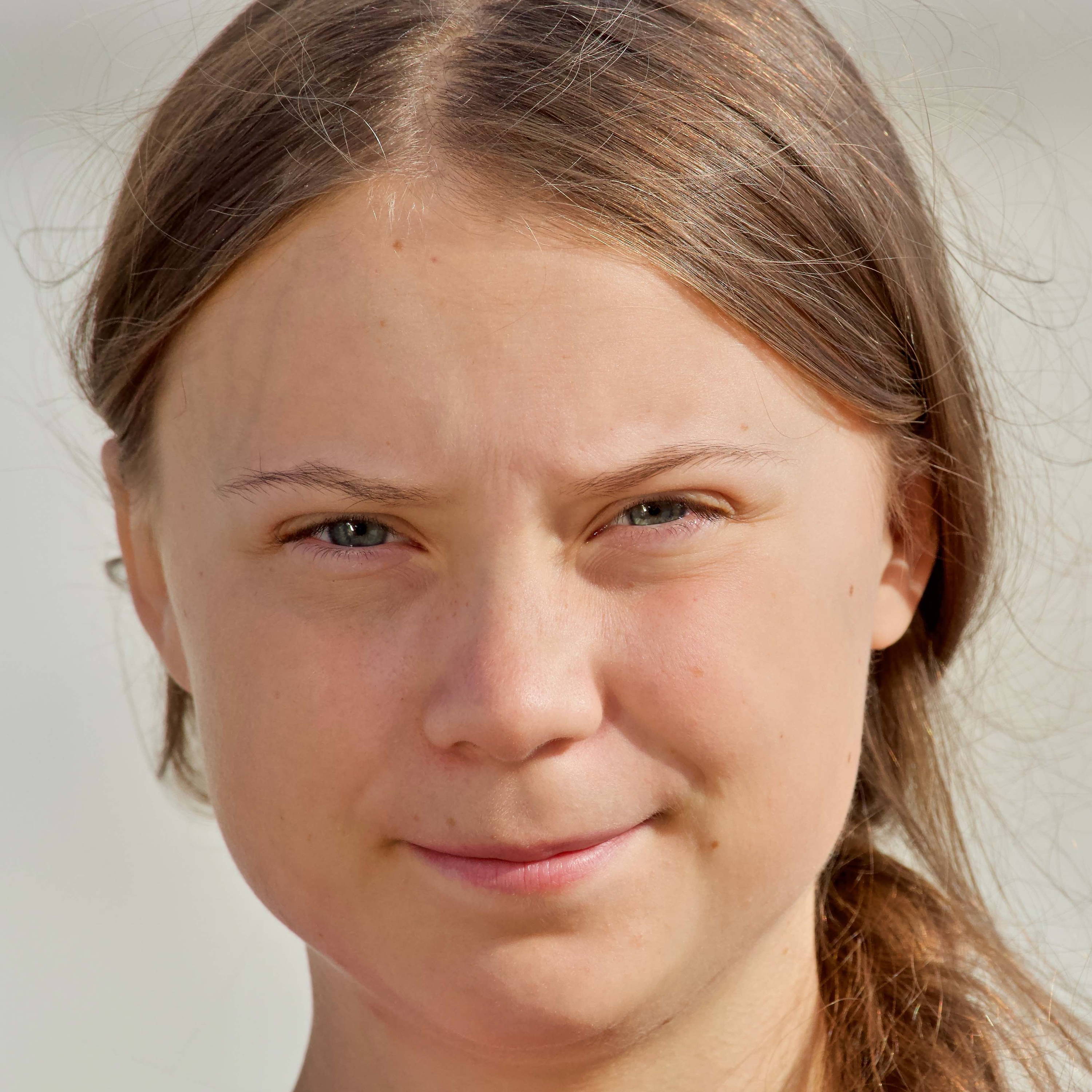 greta thunberg - meet the family behind the icon

The legendary Greta Thunberg is turning 19, but who are the loving family behind the scenes?

The world’s favourite teen activist turns 19 on 3rd January, yet it doesn’t feel that long ago that she first made headlines outside Swedish parliament back in 2018, clutching her ‘School Strike for Climate’ board for the very first time. She recently made headlines again at COP26 when she branded the biggest climate conference in history a ‘failure’ adding with trademark bluntness, ‘It should be obvious that we cannot solve a crisis with the same methods that got us into it in the first place.’

Given the impact Greta has had on the world in recent years, it’s hard to believe that before she came to be the inspiring climate activist we know and love today, her parents were worried sick about this young girl who, at the age of 11, was stuck in a dark well of depression.

In the Thunberg family’s book ‘Our House Is on Fire: Scenes of a Family and a Planet in Crisis’ Greta’s mother, the opera singer Malena Ernman, 51, shared painful memories of her daughter’s gradual plunge into despair.

‘She cried at night when she should have been sleeping. She cried on her way to school. She cried in her classes and during her breaks, and the teachers called home almost every day… She was slowly disappearing into some kind of darkness and little by little, bit by bit, she seemed to stop functioning. She stopped playing the piano. She stopped laughing. She stopped talking. And she stopped eating.’

Greta lost 10kg in two months. Her parents begged her to eat and lovingly warned her she was so ill she could soon end up in hospital. Then after a meeting with her doctor, Greta suddenly announced to her parents on the way out, ‘I want to start eating again’ to their immense relief.

It was a slow, gradual process but she was eventually diagnosed with Asperger’s syndrome (a form of ‘high-functioning autism’) and Obsessive Compulsive Disorder (OCD). Over time, with treatment, her mood began to lift and she returned to education, starting a new school.
But ultimately it was her new mission – to save the planet - that helped to catapult Greta out of the darkness and later onto the world stage. The lightbulb moment came when Greta watched a film in class about the issue of ocean pollution and the ‘island of plastic’ in the South Pacific. Her mother recalls the documentary making a huge impression on her daughter.

One hot day in Stockholm in August 2018 marked the start of a new chapter for Greta, who was then only 15. After a string of heat waves and wildfires in Sweden, she’d made the decision to miss school to sit outside Swedish Parliament every day until the general election on 9th September. A serious-faced Greta held a sign that translated as ‘School Strike for Climate’. Her key demand was that the Swedish Government reduce carbon emissions as per the Paris Agreement.

Her father, the actor and author Svante Thunberg, 52, recalls, ‘On day three someone came along and gave her Pad Thai (vegan) and she ate it… I cannot believe or explain what that meant to us, but it was just like she changed and she could do things she could never have done before.’ (Greta would usually only eat at home.)

That day kickstarted a new life, giving Greta a fresh sense of purpose and direction. It launched her global Fridays For Future (FFF) movement, which went on to engage over 13,000,000 strikers in 7500 cities across the world, and she later became a Nobel Peace Prize nominee.

In her powerful 2020 documentary I Am Greta film-maker Nathan Grossman followed her right from when she was a lone protestor on strike outside the Swedish parliament, through to her rise to become the global leader of the climate change movement. At the COP24 conference in Poland, we saw Greta announce boldly, ‘I don’t care about being popular. I care about climate justice’ - which sums up her approach perfectly.

To the rest of the world Swedish-born Greta is extraordinary, with her ability to express herself with such power, clarity and conviction (particularly impressive since she delivers her key speeches in English, instead of her native language) but to her parents, the day of her first protest she became ‘like any other’ child.

‘You think it’s not ordinary now because she’s special and she’s very famous… but to me she’s now an ordinary child,’ her father Svante told the BBC afterwards. ‘She can do all the things other people can and she’s happy. She dances around, she laughs a lot, we have a lot of fun and she’s in a very good place.’

Greta sailing with her father Svante Thunberg and crew members

Her father featured in her documentary as a loving companion throughout her years of campaigning, but surprisingly her mother Malena barely appeared. As The Guardian’s film critic Peter Bradshaw wryly noted, the fact that Malena represented Sweden in the 2009 Eurovision Song Contest is never mentioned, perhaps the directors being: ‘clearly nervous of potential mockery and sneering.’

Some critics have been quick to assume that a teenage girl couldn’t possibly have achieved all this by herself. There has even been speculation that her meteoric rise was the result of her parents’ carefully laid plan. After all, they were used to ‘performing’ – Svante as an actor and Malena as an opera singer.

In the film, it was clear that a fiercely intelligent and determined Greta is the one driving her global campaign. Far from being pushy parents - when Greta first told them about her idea for a school strike, they were actively against it, despite them discussing and researching climate change as a family for several years.

‘When she first decided we said quite clearly that we were not supportive,’ her father Svante told BBC Radio 4. ‘We said, “If you are going to do it, then you are going to have to do it by yourself. You’re going to have to be incredibly well-prepared and have all the answers to all the questions.” We thought it was a bad idea putting yourself out there with all the heat on social media.’

Before her first strike, Greta made a leaflet of over 30 shocking facts about climate change, including detailed sources. Still now, she diligently consults a team of leading scientists for her speeches, to ensure accuracy.

During her first protest, her parents were amazed to see their 15-year-old daughter calmly answering journalists’ questions, as until then she barely spoke to anyone. ‘She only spoke to me, my wife, her sister and one of the teachers,’ her father recalls. 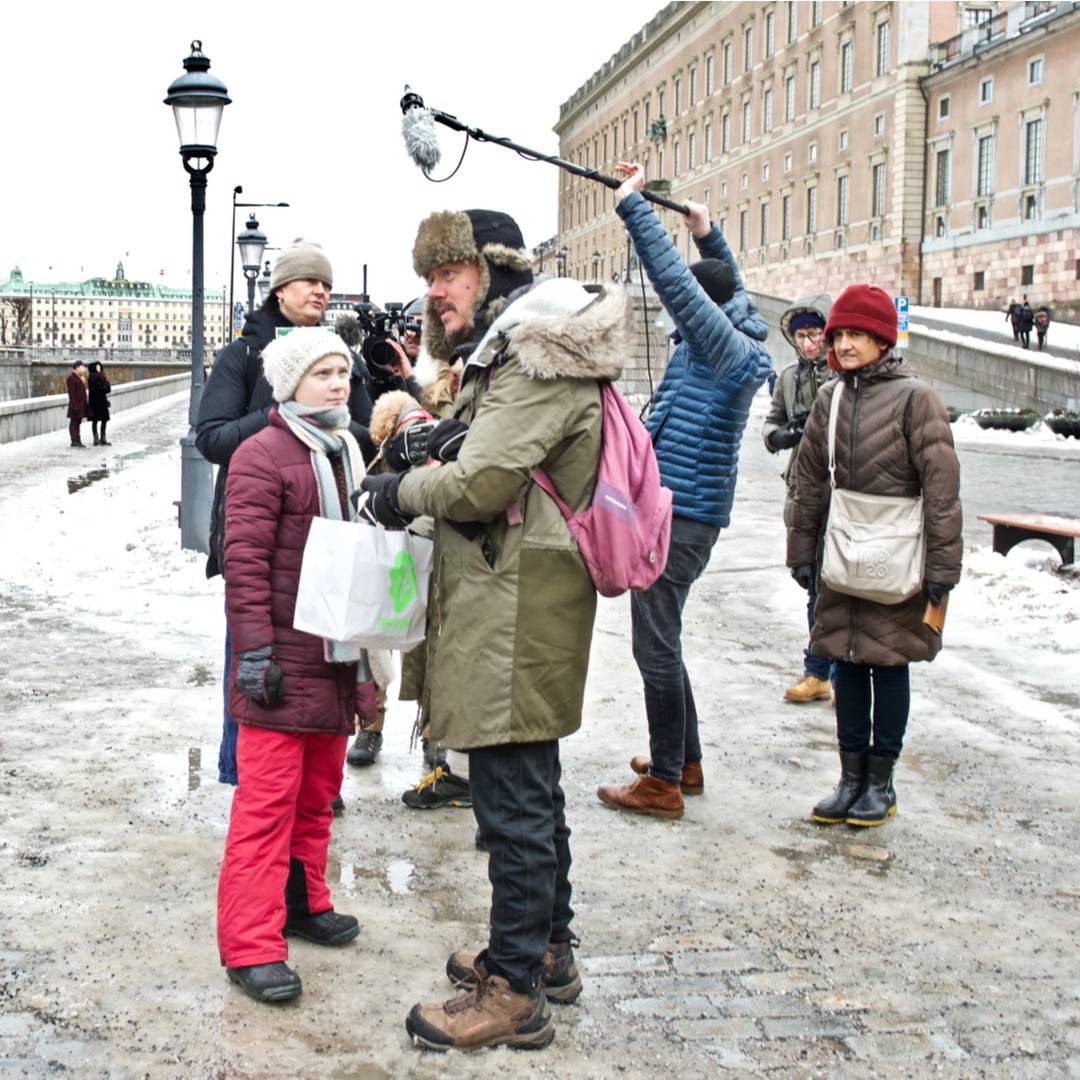 Greta with her father Svante, Sweden, 2019

One writer lucky enough to be granted a rare interview with Greta, a year later, was author and publisher Geoff Blackwell, who met her while researching his book, ‘I Know This To Be True: Greta Thunberg’, out earlier this year (co-written with Ruth Hobday).

‘I met Greta outside parliament in Stockholm where she was protesting,’ he recalls. ‘She was sitting with a small group of protesters, quietly eating her packed lunch, just another young person in the crowd. I had arranged to interview her in a nearby hotel.

‘Without any fuss we walked quietly together to the hotel. She was polite but our small talk didn’t flow easily. I hoped for a long-form interview but… I worried about whether it would be possible to sustain a long conversation. I needn’t have worried. We sat down for the interview and got our cameras rolling. There was no hair and make-up, no entourage, just a small, brave 16-year-old who a year earlier had felt sufficiently desperate about the lack of action to address climate change that she said to herself “someone needs to do something, and it might as well be me.”

‘Greta described how she had difficulty persuading her parents and teachers to support her and how “turning them over” has been a long work in progress,’ he reveals. She told Blackwell of the ‘amazing feeling’ she had when one person joined her on her second day of protesting. It struck her then that she was capable of making a difference.

When David Attenborough met Greta over Skype for the BBC back in 2019, he congratulated her, telling her she ‘had achieved things that many of us who have been working on it for 20-odd years have failed to achieve… You have aroused the world.’ 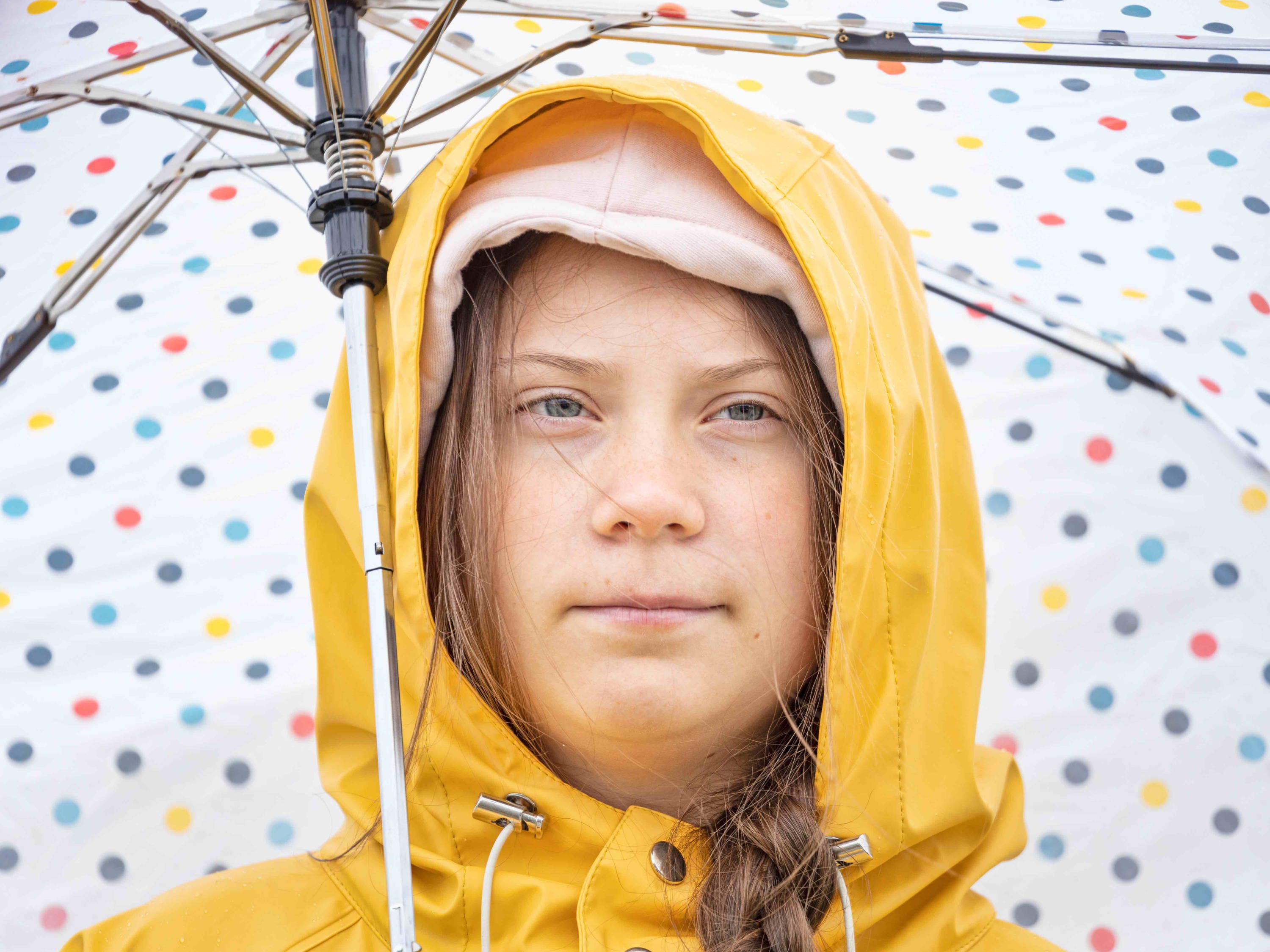 Greta’s work has also transformed the lives of her own family. Her concerns over air travel led her opera singer mother to quit touring the world for performances and Greta guilt-tripped both parents into turning vegan (her mum is 90 per cent there) through stressing that they were stealing her generation’s future, by ‘using up our planet’s resources’.

Despite her strength of character, Greta’s parents are still protective over her. When she famously sailed by high-powered yacht to UN climate summits in New York and Madrid, her father joined her, not ‘to save the climate’ but to ‘save my daughter’.

As well as being a world-famous activist, Greta has become a role model for others with Asperger’s syndrome too. As a spectrum condition, it affects people differently, but can cause problems with communication and also lead to obsessions. Instead of seeing her Asperger’s as a disability, Greta has proudly described it as her ‘super-power’. ‘When I become interested in a subject, I become laser-focussed,’ she explains in the film.

‘Many autistic people have very focused interests. These can change over time or be life-long, often starting from a young age,’ explains Jane Harris of the National Autistic Society.

‘These passions can be a source of great strength, as they are for Greta. It’s incredible to see the impact that she is having on the world and for autistic people, it’s so important that Greta is talking about how her autism is integral to her vision and drive.’

Greta continues to inspire people of all ages, holding politicians to account and being the voice of her generation. As she tweeted recently to her five million followers: 'The people in power don’t need conferences, treaties or agreements to start taking real climate action. They can start today. When enough people come together then change will come and we can achieve almost anything. So instead of looking for hope – start creating it.' 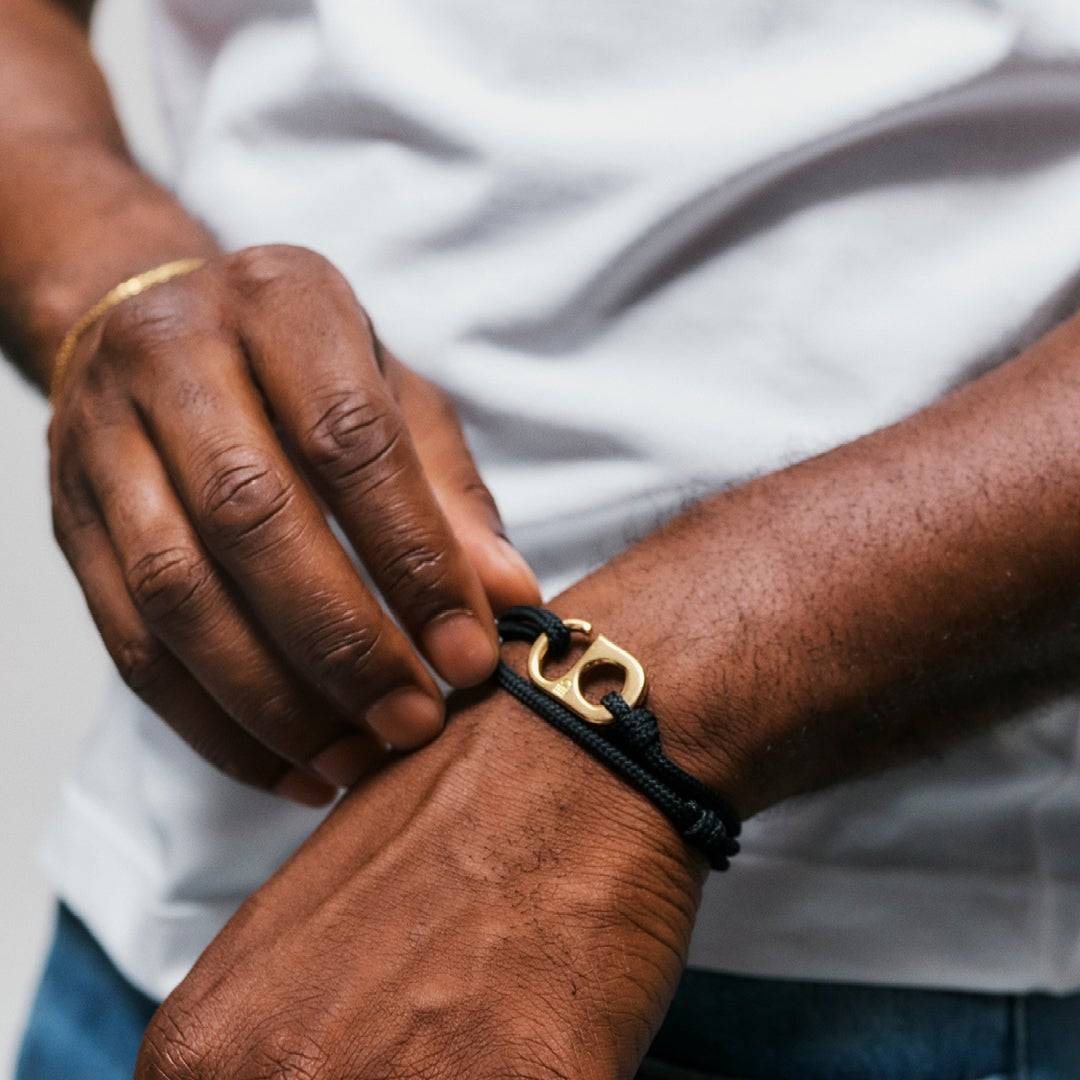 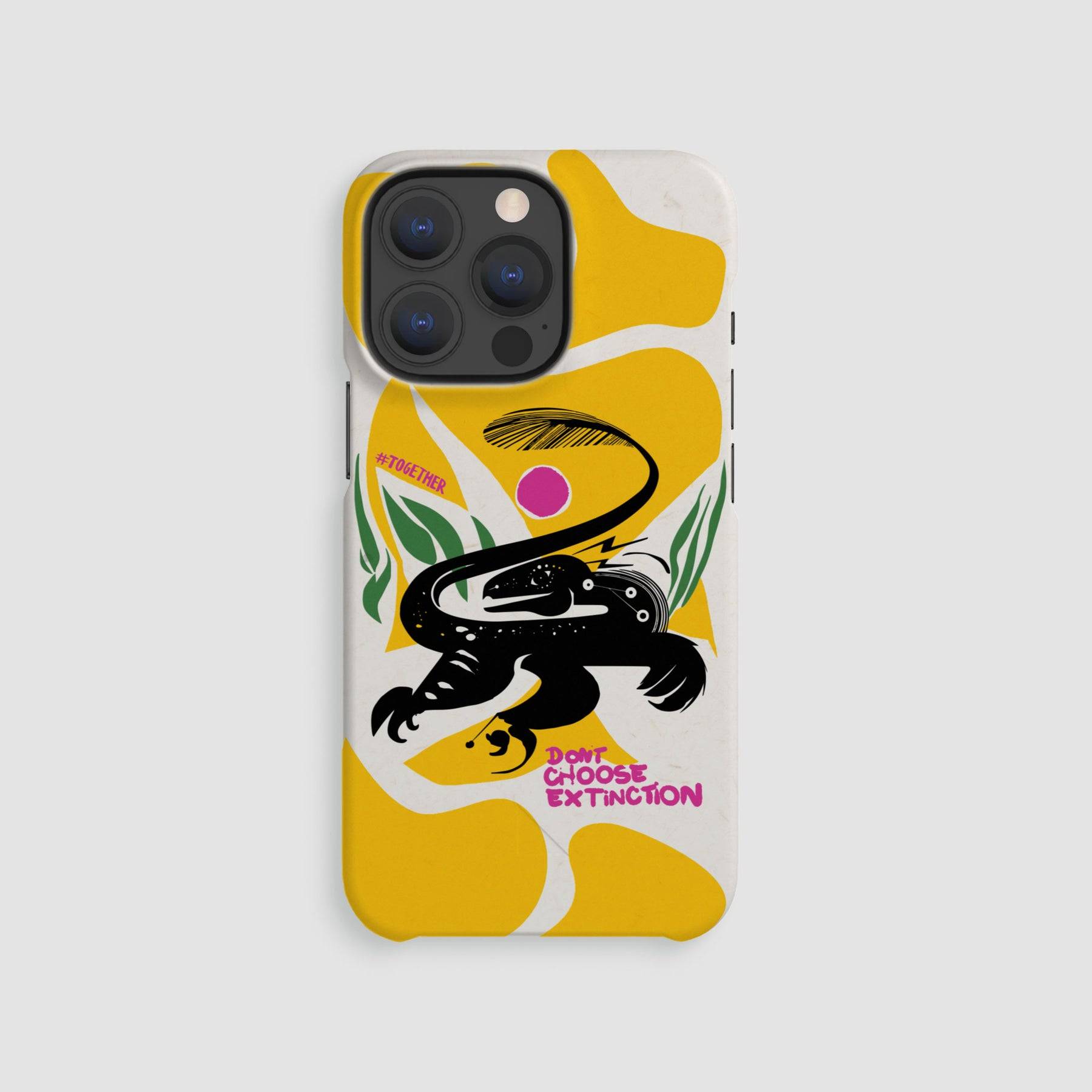 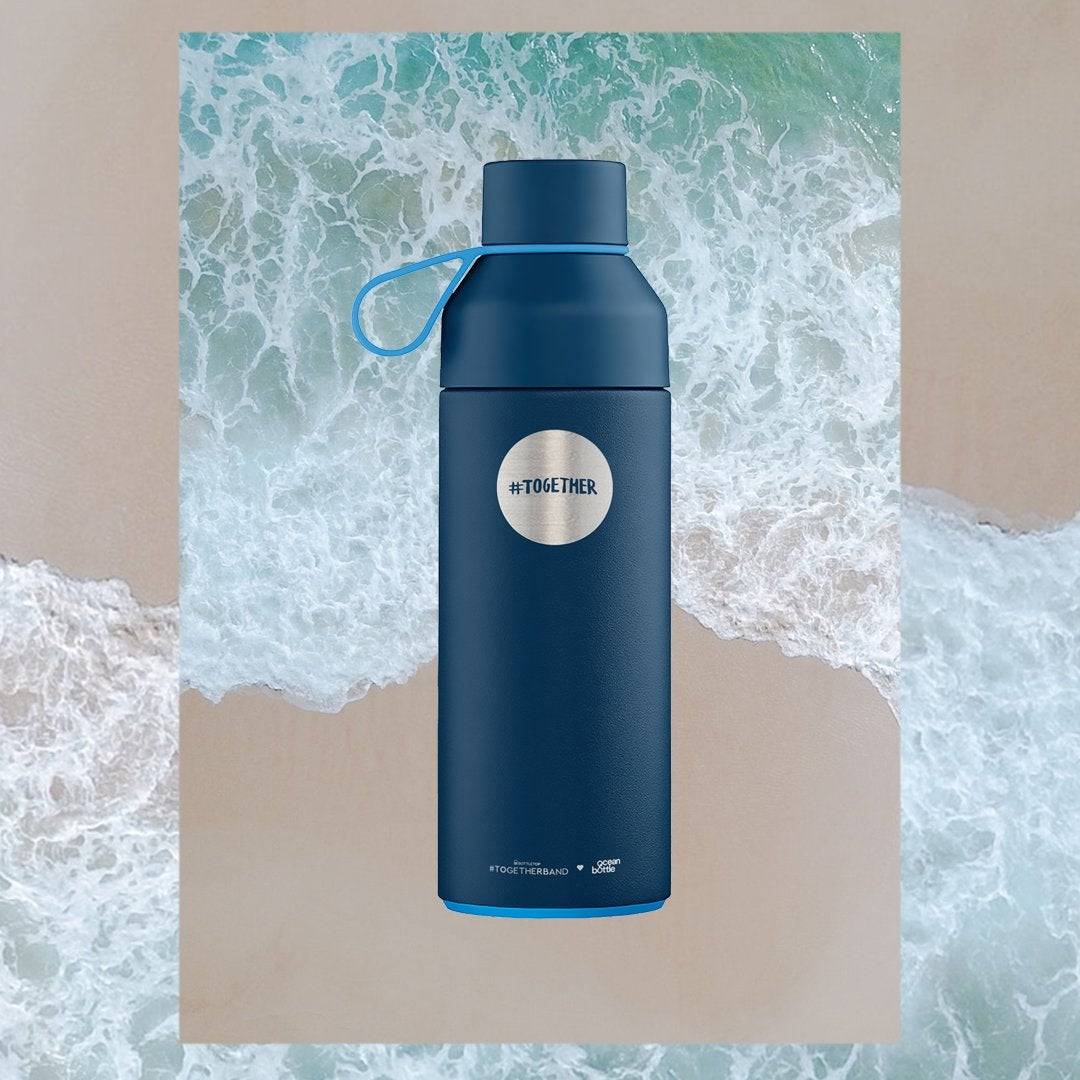 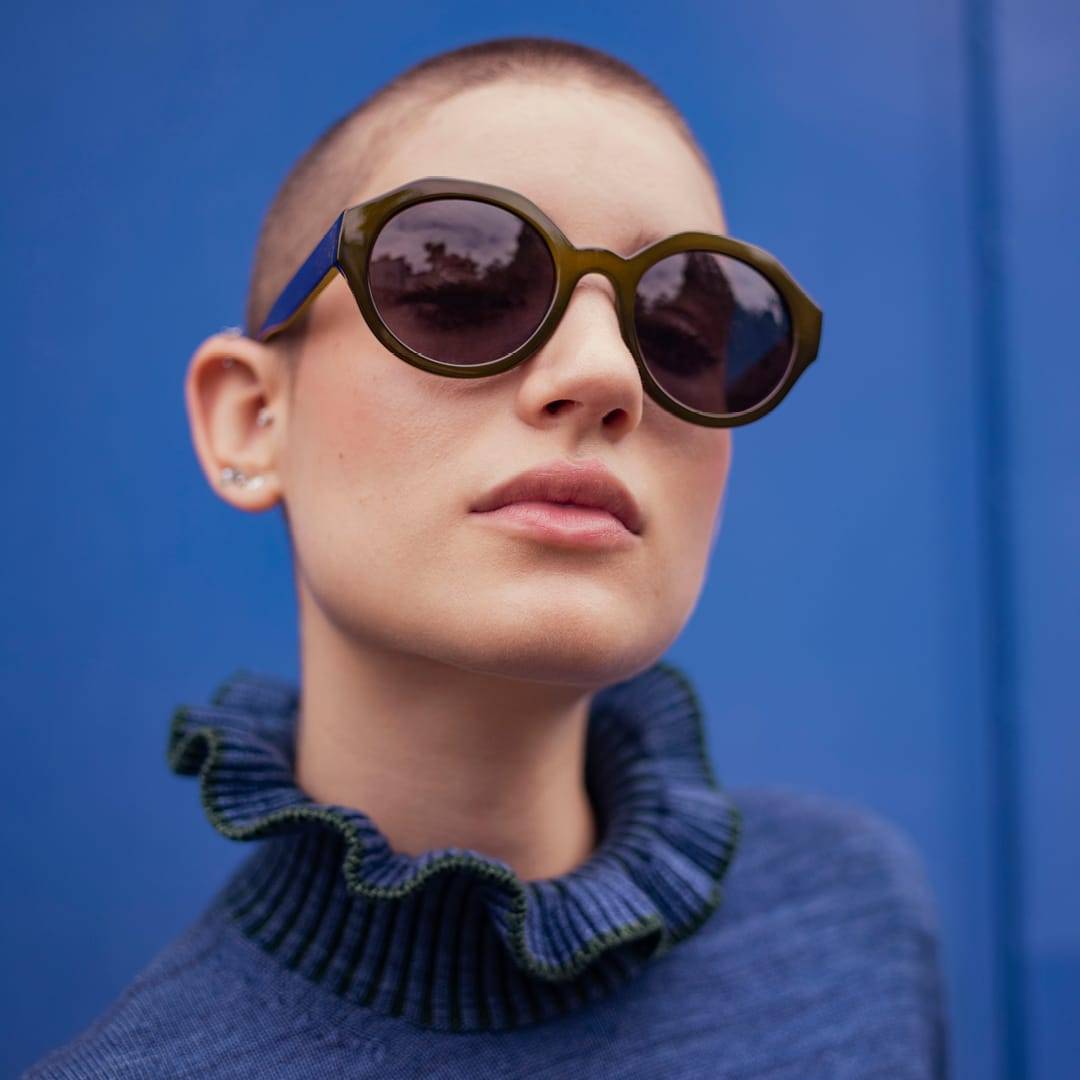 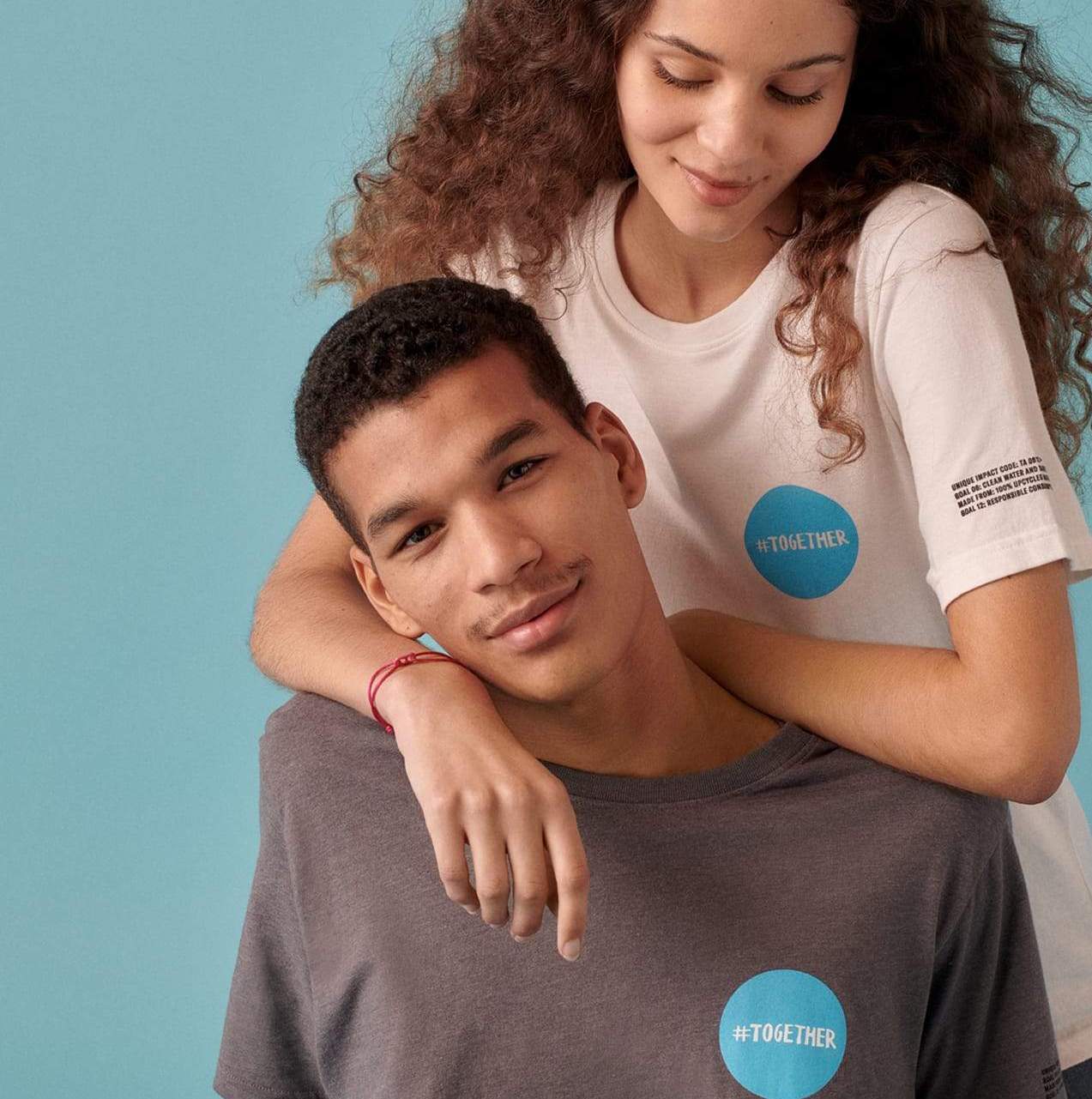 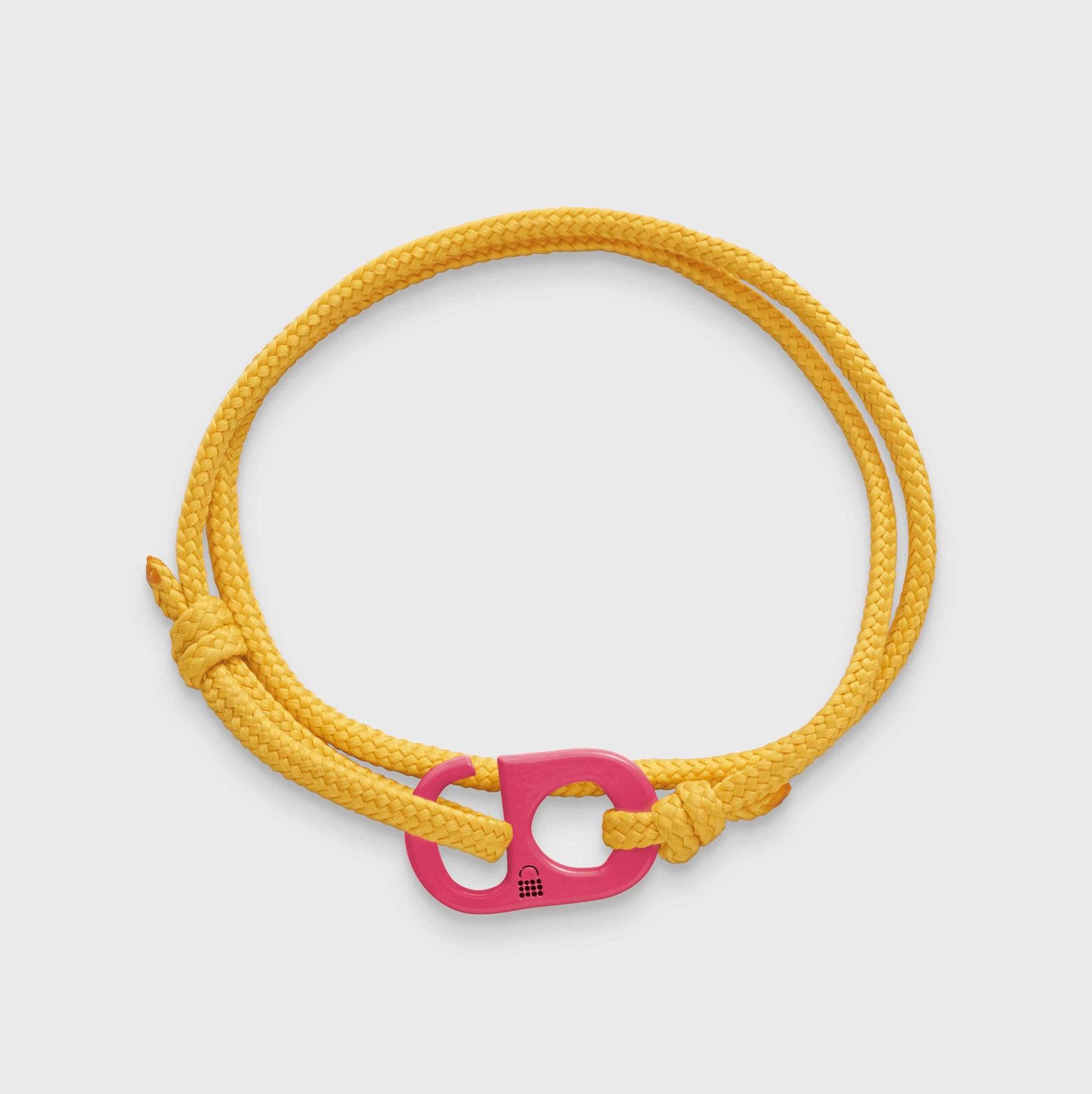 Sustainability is at the heart of everything we do. All of our products are made from recycled materials and proceeds from sales go to projects and charities that advance the UN's 17 Sustainable Development Goals. Choose from recycled Ocean Plastic® wrist bands, sunglasses made from recycled CDs, compostable phone cases, and more. Shop now! 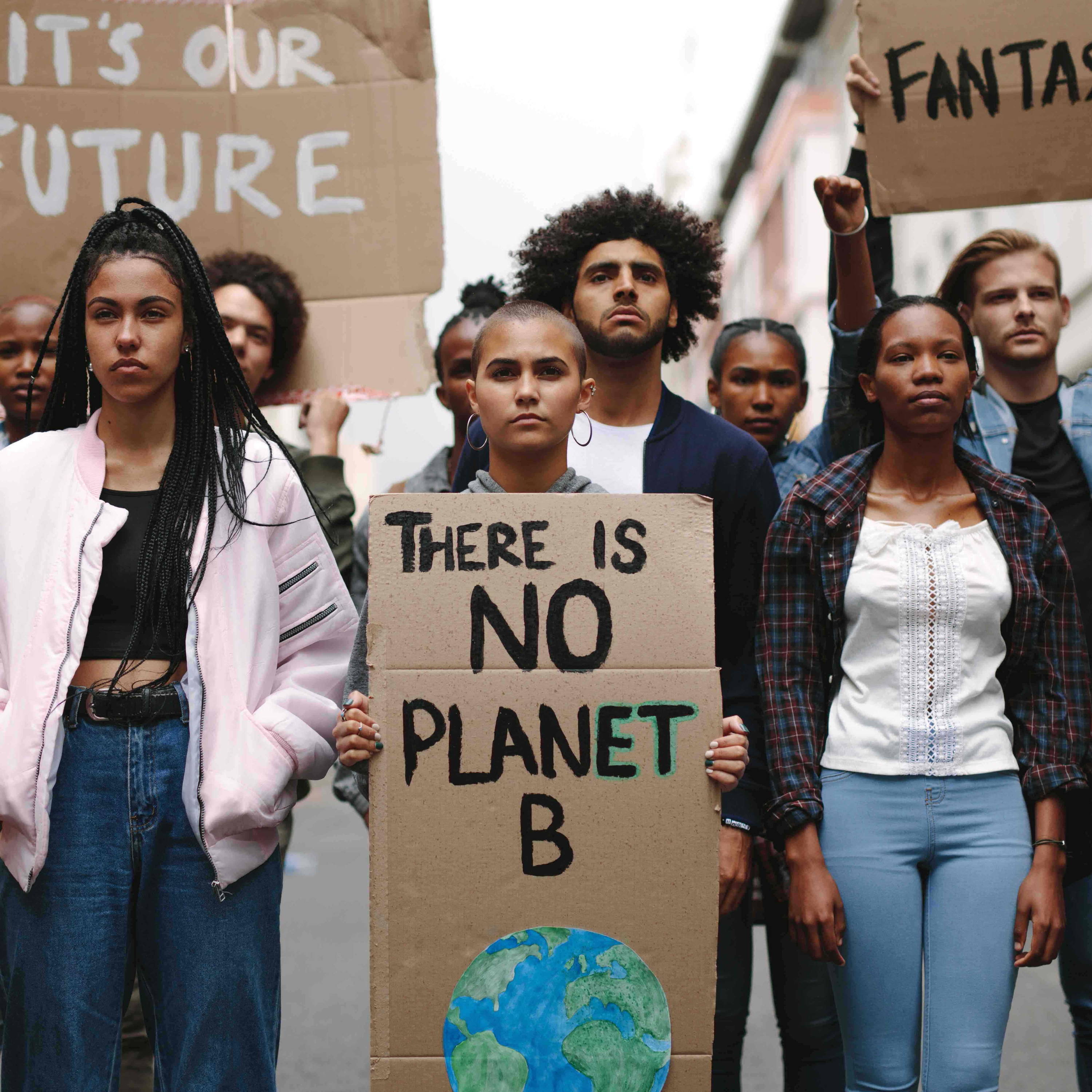 The A-Z Of Youth Climate Activism 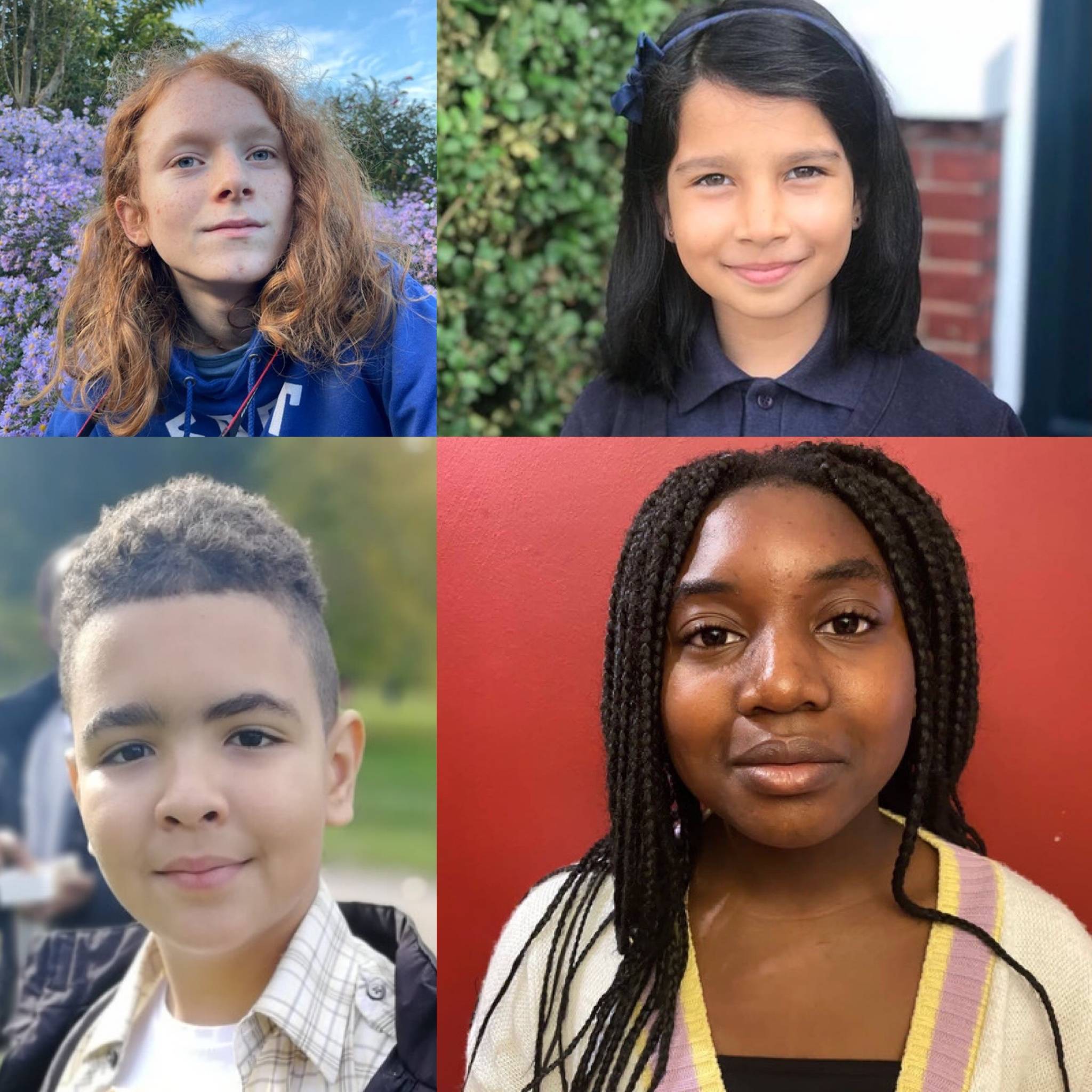 How Young People Would Solve The Climate Crisis

5 Easy Ways to Go Green with Your Finances

'I ditched my City Job To Join XR'